These are some basic principles that we want maintainers to follow when maintaining NewPipe.

NewPipe is a media player for devices on the Android platform, thus it is intended to be used for entertainment. This means it does not have to be some professional application, and it does not have to be complicated to be used. However NewPipe might not focus on the casual user completely as there are some features designed for more experienced users which may require some knowledge about code, however in essence NewPipe should be easy to use, even for an average Android user. 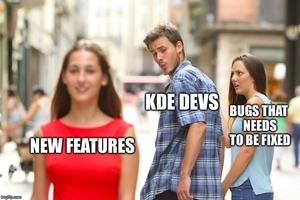 Disclaimer: This is a meme. Please don't take it personally.

Always prioritize fixing bugs, as the best application with the best features does not help much if it is broken, or annoying to use. Now if a program is in an early stage it is quite understandable that many things break. This is one reason why NewPipe still has no "1" in the beginning of its version number. By now, NewPipe is in a stage where there should be a strong focus on stability.

Features are also something that can cause a headache. You should not blindly say yes to features, even if they are small, but you should also not immediately say no. If you are not sure, try the feature, look into the code, speak with the developer, and then make a decision. When considering a feature, ask yourself the following questions:

If a PR contains more than one feature/bugfix, be cautious. The more stuff a PR changes, the longer it will take to be added. There also might be things that seem to not have any issues, but other things will, and this would prevent you from merging a PR. This is why it is encouraged to keep one change per pull request, and you should insist that contributors divide such PRs into multiple smaller PRs when possible.

When you talk to the community, stay friendly and respectful with good etiquette. When you have a bad day, just don't go to GitHub (advice from our experience ;D ).

NewPipe is translated via Weblate. There are two different components which are open for translation:

Maintainers can access more options to handle Weblate via the Manage > Repository Maintenance button or via the Weblate CLI. These options include basic access to Git operations like commit and rebase as well as locking Weblate to prevent further changes to translations. 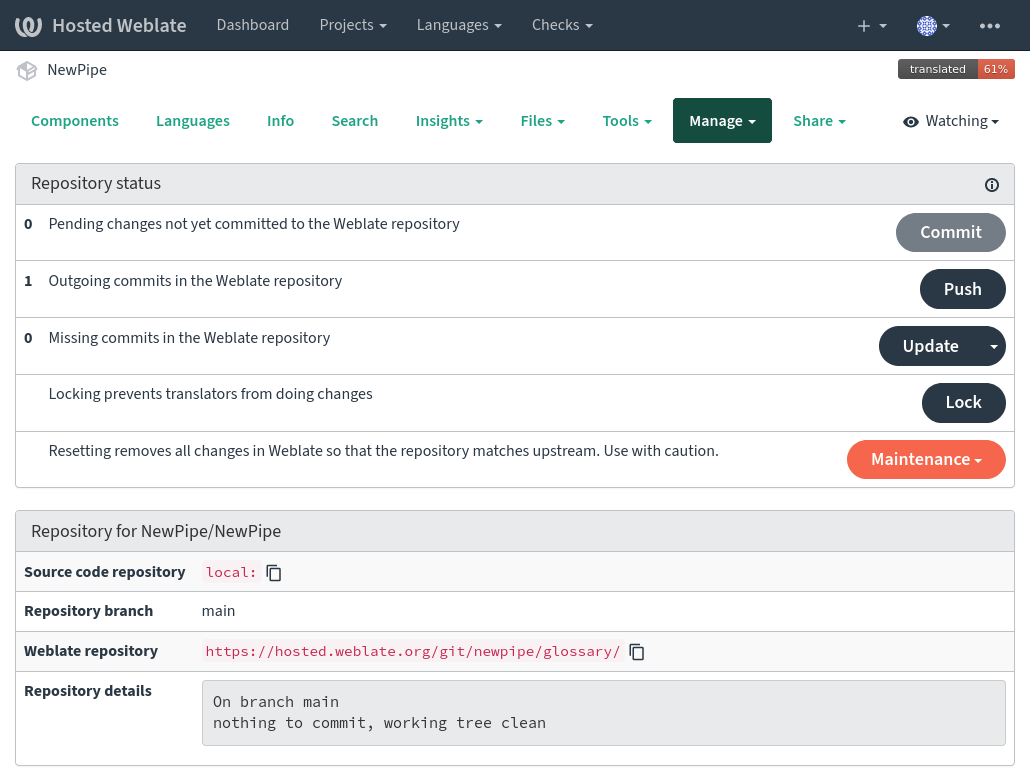 HINT: When updating Weblate via the web interface, please use the "Update > Rebase" option.

Weblate is based on NewPipe's dev branch and is configured to automatically update its repository to be in sync with NewPipe. However, Weblate does not update its branch often, therefore it is better to update it manually after changing strings in NewPipe.

To do thus manually, commit the Weblate changes and rebase the repository. Sometimes conflicts need to be resoled while rebasing the repository. Conflicts need to be addressed ASAP, because Weblate is automatically locked once conflicts occur. To do so, merge the changes from Weblate into NewPipe. If Weblate does not recognize the new commit by itself, ask Weblate to rebase once more. Weblate unlocks the translations when all conflicts are resolved and no errors are detected.

Merge changes from Weblate into NewPipe

Weblate does not push the translation changes to NewPipe automatically. Doing this manually, allows the maintainers to do a quick review of the changes.

Before merging weblate changes into NewPipe, make sure to commit all Weblate changes and lock the Weblate to prevent modifications while you update Weblate. To merge the changes into NewPipe, checkout Weblate's dev branch. You have read access to Weblate's repository via https://hosted.weblate.org/git/newpipe/strings/. If there are conflicts when rebasing weblate, resolve them.

Push the changes to NewPipe's dev branch, update Weblate and unlock it.