This is an effort to reverse-engineer the Raspberry Pi license key check for MPEG-2 and VC-1 hardware video encoding.

A patch for start.elf, a firmwware blob for the VideoCore IV processor used by all Raspberry Pi models, was posted to reddit by /u/fuck_the_mpeg_la on 03-03-2017:

Applying it to a 4.14.44 start.elf (latest as of time of writing) results in the following diff:

Some initial analysis was done by q3k on Hacker News:

Yes, it seems to patch a licensing function at 0xEC95FD4 [1] to always return 1, by patching the jump at 0xEC95FE2 (that should be only taken for the always-allowed H263 codec) to always be taken, thus always allowing all codecs. 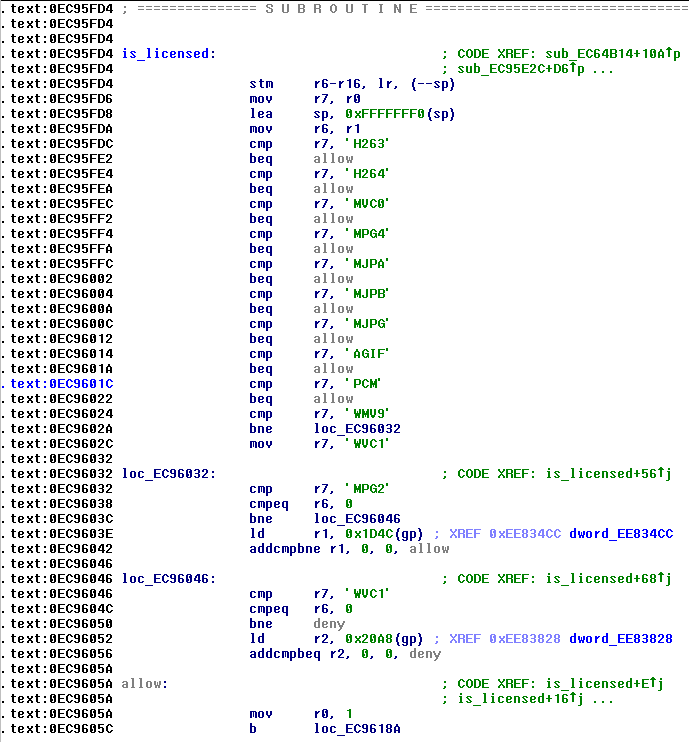 The initial entry point is disassembled using the VideoCore IV plugin for IDA Pro 6 by hermanhermitage.

After loading and analyzing start.elf, we can find the is_licensed routine at address 0xEC96290 by jumping to the file offset given to us by xxd beforehand. The relevant code sections are available in sub_EC96290.asm and is_licensed.asm.

Here, two memory locations (0xEE86680 for MPEG-2 and 0xEE869E0 for VC-1) that point to the .bss segment are checked to determine the return value of is_licensed. There are no other obvious references to these locations in start.elf, so memory-breakpoint debugging (TBD) is probably needed.